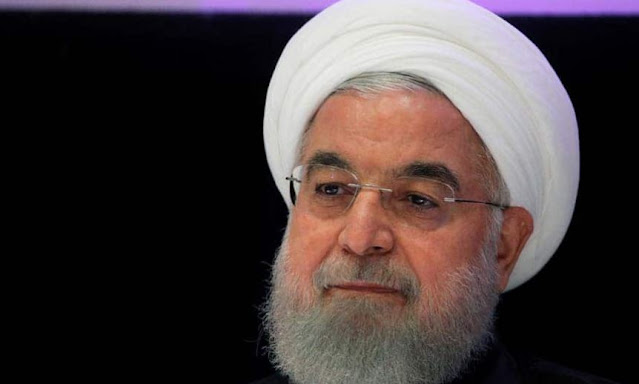 Iran`s president told the UN General Assembly on Tuesday that the United States could impose "neither negotiations nor war" on the Islamic Republic amid heightened tension between the longtime foes over Tehran`s 2015 nuclear deal with major powers.

"Iran is not a bargaining chip in US elections and domestic policy ... Any US administration after the upcoming (US) elections will have no choice but to surrender to the resilience of the Iranian nation," Hassan Rouhani told the annual UN gathering in a video message.

The US-Iranian confrontation has intensified since 2018 when President Donald Trump withdrew the United States from Iran’s nuclear deal with world powers and unilaterally reimposed sanctions that have hobbled the Islamic Republic’s economy. Trump wants a broader agreement with Tehran`s clerical rulers that would further restrict Iran’s nuclear programme, halt its ballistic missile development work and end its support for proxy forces around the Middle East.

Iran has refused to hold talks with the United States unless Washington lifts sanctions on Tehran and returns to the original agreement. In retaliation for US pressure, Tehran has scaled back compliance with nuclear capacity limits set by the deal. In his UN address earlier on Tuesday, Trump said: "We withdrew from the terrible Iran nuclear deal and imposed crippling sanctions on the world’s leading state sponsor of terror". Iran denies supporting terrorism.

The Trump administration on Monday slapped new sanctions on Iran to support the US assertion that all United Nations sanctions against Tehran that were lifted under the 2015 agreement are now reinstated. That move was rejected by key European allies as well as US adversaries such as Russia and China who are all parties to the nuclear accord.

"This is a victory not just for Iran, but for the global community - during the transitional international order in the post-Western world - that an aspirant to hegemony is humiliated in such self-created isolation," Rouhani said, referring to the Trump administration. In his address to the General Assembly, French President Emmanuel Macron said the Trump`s administration`s "maximum pressure" campaign against Iran had so far failed. Macron dismissed US efforts to restore UN sanctions against Tehran as Washington had already left the nuclear deal.