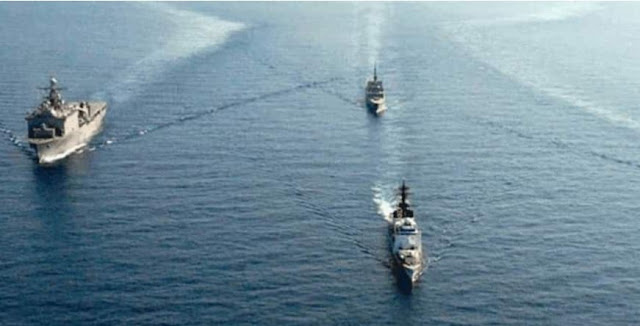 China has escalated its previously announced exercise activities in the South China Sea by launching four medium-range missiles impacting the stretch between Hainan Island and the Paracel Islands, the Pentagon said Thursday.
The Department of Defense is concerned about China's recent decision to conduct military exercises, including the firing of ballistic missiles, around the Paracel Islands in the South China Sea on August 23-29, the Pentagon said in a statement.
Conducting military exercises over disputed territory in the South China Sea is counterproductive to easing tensions and maintaining stability, the Pentagon said, adding that Chinese actions, including missile tests, further destabilise the situation in the South China Sea.
Such exercises also violate China's commitments under the 2002 Declaration on the Conduct of Parties in the South China Sea to avoid activities that would complicate or escalate disputes and affect peace and stability, and call into question its motivations with ongoing negotiations for a Code of Conduct between China and ASEAN, the Pentagon said.
This military exercise, the Pentagon said, is the latest in a long string of Chinese actions to assert unlawful maritime claims and disadvantage its Southeast Asian neighbors in the South China Sea.
Chinese actions stand in contrast to its pledge to not militarise the South China Sea and are in contrast to the US vision of a free and open Indo-Pacific region, in which all nations, large and small, are secure in their sovereignty, free from coercion, and able to pursue economic growth consistent with accepted international rules and norms.
The Pentagon said that it alerted China in July that it would continue to monitor the situation with the expectation that China will reduce its militarisation and coercion of its neighbors in the South China Sea.
China chose to escalate its exercise activities by firing ballistic missiles, it said and urged all parties to exercise restraint and not undertake military activities that could threaten freedom of navigation and aggravate disputes in the South China Sea.
The Pentagon also announced to deploy Task Force Ellis, comprising US Marines and Sailors from I Marine Expeditionary Force, aboard the USS Comstock to the Indo-Pacific to conduct theater security cooperation activities through November 2020.
Task Force Ellis is designed to provide a forward-deployed capability to respond to a variety of crises and contingencies throughout the region, to include supporting Humanitarian Assistance and Disaster Relief (HA/DR) operations, it said.
According to a media release, the Task Force also stands ready to conduct military-to-military training, subject matter expert exchanges, and key leader engagements.
The Task Force is comprised approximately 120 US Marines and Sailors from 1st Marine Division, 3rd Marine Aircraft Wing, 1st Marine Logistics Group, I MEF Information Group, and 1st Reconnaissance Battalion.
"Task Force Ellis is forward-deployed with a wide range of capabilities to highlight the US commitment to a free and open Indo-Pacific," the Pentagon said.