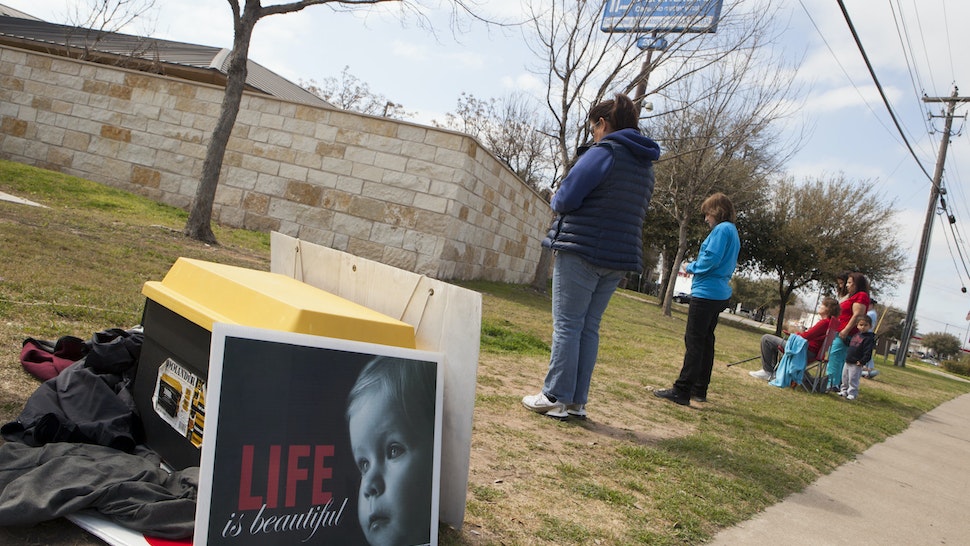 
Cities For Life, Benham’s non-profit that connects women who choose life with extensive medical and support services, says they were obeying social distancing orders and, as a charity providing assistance for those in need, Cities for Life is considered an essential service. Indeed, both the state and city stay-at-home orders list Federally recognized public charities that offer social services are essential services.
After receiving a call from one of his sidewalk counselors, Benham told the Daily Wire, he drove to the abortion clinic, where he saw his group surrounded by about fifteen individual police officers.
The law enforcement officers told Benham that, “there’s more than ten people here,” and advised him that if the group did not disperse, they would be arrested.
“We do care about the health crisis,” Benham told the Daily Wire. “We did practice social distancing.” He added that his group chalked the sidewalk so that they could remain ten feet apart from one another, and had plenty of hand sanitizer available.
The group’s history with the state and city also gave Benham reason to believe Cities for Life was being unfairly targeted: “This is selective enforcement of the law. You are coming after us because we’re standing in front of an abortion clinic.”
Benham catalogued the incident on his Twitter account, and included a video showing him facing off with North Carolina police officers who accused Benham of engaging in “non-essential” activity outside of the abortion clinic, even though the clinic is open and providing abortions.
“This morning, was unlawfully arrested while supporting sidewalk counselors outside an abortion clinic. Many have labeled David a fake Christian and claimed that he endangered lives by being out. These accusations couldn’t further from the truth,” Benham’s account reported Sunday morning.
“David maintained social distancing while exercising all necessary precautions in light of COVID-19,” the Benham Brothers account continued. “This video has the full story. Thank you for your continued support as we fight for life!”
The video shows David interacting with a police officer and explaining that, if abortions are allowed to continue inside the clinic, than the work of pro-lifers, ministering to at-risk women, is also essential. He also explains that the sidewalk counselors are maintaining the recommended six foot “social distance” and washing their hands frequently.
“(2) The sidewalk counselors stayed over 6’ apart and there were less than five of them. Yet this officer selectively enforced the law, even though Cities4Life had less than 10 people,” the Benham Brothers reported.
The group, he says, helps more than 5,000 women a month choose life.
Sen. Ted Cruz (R-TX) rushed to David’s defense, posting the video and noting that, as an attorney, he believes David’s arrest is unconstitutional, given that he was engaging in Constitutionally protected speech and abiding by Centers for Disease Control and Prevention guidelines.
“WATCH: My friend David Benham was unconstitutionally arrested today in NC for peacefully providing pregnancy counseling outside an abortion clinic. If NC deems abortion “essential,” then pregnancy care services are as well. This is WRONG; Governor Cooper should be ashamed,” Cruz wrote, referencing North Carolina’s governor, who issued the shelter in place order back on March 27, 2020, but insists that abortion services are “essential” and cannot be disrupted.
“2/x This is an unconstitutional arrest,” Cruz continued. “@BenhamBrothers exercising core First Amendment rights. PEACEFULLY. In a way fully consistent w/ public safety. Because elected Dems are pro-abortion, they are abusing their power—in a one-sided way—to silence pregnancy counselors.”
In a separate thread, Cruz laid out the case against Benham’s arrest.
“Take 2 minutes to WATCH the full video. Have you ever seen an arrest like this? Peaceful. Respectful. Thanking the police officers. Elected Dems are abusing their power for political agenda & face civil liability under 42 USC 1983,” Cruz wrote, referecing the Federal statute under which individuals whose Constitutional rights have been violated may bring a case against public servants.
“42 USC 1983: Every person who, under color of any statute, ordinance, regulation, custom, or usage, of any State…,” Cruz wrote, citing the provision. “…subjects, or causes to be subjected, any citizen to the deprivation of any rights, privileges, or immunities secured by the Constitution and laws, shall be liable to the party injured in an action at law, suit in equity, or other proper proceeding for redress…”
David wrote his own account on social media Sunday, as well.
“My boys and I went to support the awesome sidewalk counselors who work with our non- profit, Cities for Life,” David wrote on Twitter. “We offer life-affirming services for at-risk mothers. It’s been an absolute privilege serving over 5,000 vulnerable mothers who felt abortion was their only choice!”
We support taking every precaution during COVID-19,” he added. “This is why we maintained our social distance and stayed under 10 in number. We were not belligerent… We simply stood our ground. MLK once said, ‘A man dies when he refuses to stand up for that which is right.'”
Speaking to the Daily Wire, Benham said he will continue to pursue the case and publicize the incident so that states and cities recognize their power, even in a crisis, cannot be unchecked.
“I am not going to let the government have unlimited power and use this crisis to their advantage,” he said.