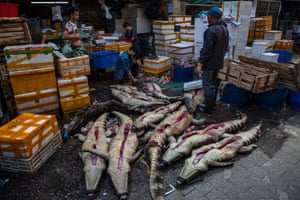 The United Nations’ biodiversity chief has called for a global ban on wildlife markets – such as the one in Wuhan, China, believed to be the starting point of the coronavirus outbreak – to prevent future pandemics.
Elizabeth Maruma Mrema, the acting executive secretary of the UN Convention on Biological Diversity, said countries should move to prevent future pandemics by banning “wet markets” that sell live and dead animals for human consumption, but cautioned against unintended consequences.
China has issued a temporary ban on wildlife markets where animals such as civets, live wolf pups and pangolins are kept alive in small cages while on sale, often in filthy conditions where they incubate diseases that can then spill into human populations. Many scientists have urged Beijing to make the ban permanent.
Using the examples of Ebola in west-central Africa and the Nipah virus in east Asia, Mrema said there were clear links between the destruction of nature and new human illnesses, but cautioned against a reactionary approach to the ongoing Covid-19 pandemic.
“The message we are getting is if we don’t take care of nature, it will take care of us,” she told the Guardian.
“It would be good to ban the live animal markets as China has done and some countries. But we should also remember you have communities, particularly from low-income rural areas, particularly in Africa, which are dependent on wild animals to sustain the livelihoods of millions of people.
“So unless we get alternatives for these communities, there might be a danger of opening up illegal trade in wild animals which currently is already leading us to the brink of extinction for some species.
“We need to look at how we balance that and really close the hole of illegal trade in the future.”
As the coronavirus has spread around the world, there has been increased focus on how humanity’s destruction of nature creates conditions for new zoonotic illness to spread.
Jinfeng Zhou, secretary general of the China Biodiversity Conservation and Green Development Foundation, called on authorities to make the ban on wildlife markets permanent, warning diseases such as Covid-19 would appear again.
“I agree there should be a global ban on wet markets, which will help a lot on wildlife conservation and protection of ourselves from improper contacts with wildlife,” Zhou said. “More than 70% of human diseases are from wildlife and many species are endangered by eating them.”
Mrema said she was optimistic that the world would take the consequences of the destruction of the natural world more seriously in the wake of the Covid-19 outbreak when countries returned to negotiate the post-2020 framework for biodiversity, billed as the Paris agreement for nature.
“Preserving intact ecosystems and biodiversity will help us reduce the prevalence of some of these diseases. So the way we farm, the way we use the soils, the way we protect coastal ecosystems and the way we treat our forests will either wreck the future or help us live longer,” she said.
“We know in the late 1990s in Malaysia with the outbreak of Nipah virus, it is believed that the virus was a result of forest fires, deforestation and drought which had caused fruit bats, the natural carriers of the virus, to move from the forests into the peat farms. It infected the farmers, which infected other humans and that led to the spread of disease.
“Biodiversity loss is becoming a big driver in the emergence of some of these viruses. Large-scale deforestation, habitat degradation and fragmentation, agriculture intensification, our food system, trade in species and plants, anthropogenic climate change – all these are drivers of biodiversity loss and also drivers of new diseases. Two thirds of emerging infections and diseases now come from wildlife.”
In February, delegates from more than 140 countries met in Rome to respond for the first time to a draft 20-point agreement to halt and reverse biodiversity loss, including proposals to protect almost a third of the world’s oceans and land and reduce pollution from plastic waste and excess nutrients by 50%.
A major summit to sign the agreement in October was scheduled in the Chinese city of Kunming but has been postponed because of the coronavirus outbreak.

… we’re asking readers like you to make a contribution in support of our open, independent journalism. In these frightening and uncertain times, the expertise, scientific knowledge and careful judgment in our reporting has never been so vital. No matter how unpredictable the future feels, we will remain with you, delivering high quality news so we can all make critical decisions about our lives, health and security. Together we can find a way through this.
You’ve read 7 articles in the last four months. We believe every one of us deserves equal access to accurate news and calm explanation. So, unlike many others, we made a different choice: to keep Guardian journalism open for all, regardless of where they live or what they can afford to pay. This would not be possible without the generosity of readers, who now support our work from 180 countries around the world.
We have upheld our editorial independence in the face of the disintegration of traditional media – with social platforms giving rise to misinformation, the seemingly unstoppable rise of big tech and independent voices being squashed by commercial ownership. The Guardian’s independence means we can set our own agenda and voice our own opinions. Our journalism is free from commercial and political bias – never influenced by billionaire owners or shareholders. This makes us different. It means we can challenge the powerful without fear and give a voice to those less heard.
Your financial support has meant we can keep investigating, disentangling and interrogating. It has protected our independence, which has never been so critical. We are so grateful.
We need your support so we can keep delivering quality journalism that’s open and independent. And that is here for the long term. Every reader contribution, however big or small, is so valuable.